£12k raised in The Prideview Cricketers’ Cup ’14, won by Logicare!

The 3rd edition of The Prideview Cricketers' Cup, contested on Saturday 26th July '14, was another huge success and we are delighted to announce that the event raised £12,000 for Big Hug Foundation! 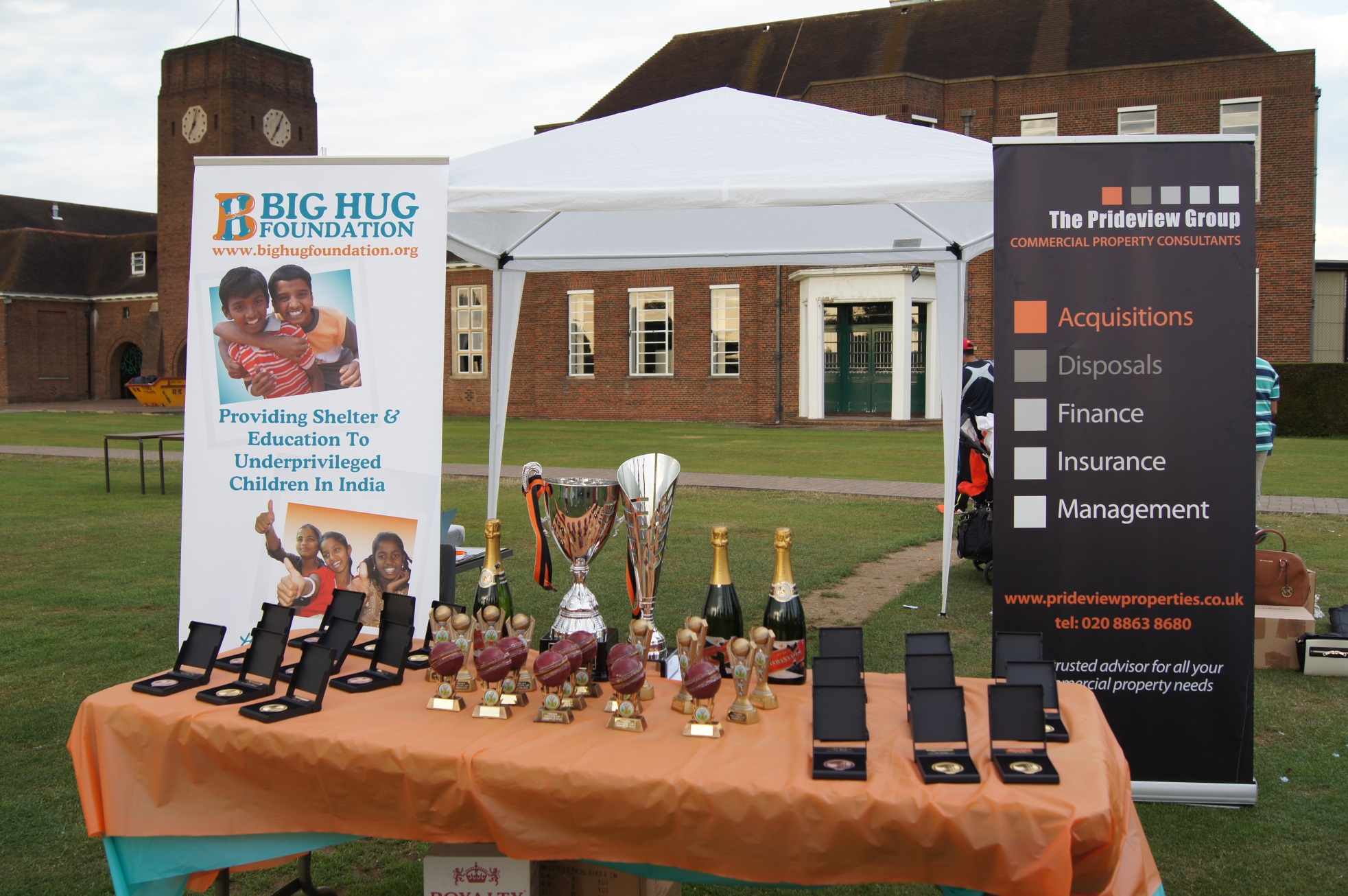 The monies raised from our 3 cricket tournaments over the last two years has been instrumental in enabling Big Hug to commence construction of the brand new orphanage they are building in Coimbatore, South India. With that construction now underway and funds in place, Big Hug can also start work on redeveloping a number of homes in a slum colony in Ooty, a hill station 80km north of Coimbatore. You can keep up to date with Big Hug's work by following their Facebook page, and we too will endeavour to keep you posted. We would like to thank all players, spectators, sponsors, umpires and volunteers for coming together to raise such a fantastic amount and also for making it a day to remember. You can see all the best pics on Prideview's Facebook album here.

In total, 12 teams participated scoring 2,265 runs at an average economy rate of 11 runs per over, with a staggering 60 sixes were smashed! Perhaps next year we will need to hand out hard-hats, anyone fancy doing a say £10 per six charity donation next year?!
With the hosts Prideview expected to top this one, the 1st game between Bellevue Mortlakes and Liquid Bubble was a crunch match. It turned out to be a cagey encounter with Bellevue struggling to muster up 39 and Liquid almost fluffing the chase after losing wickets late on, but they eventually got over the line with a few balls to spare. 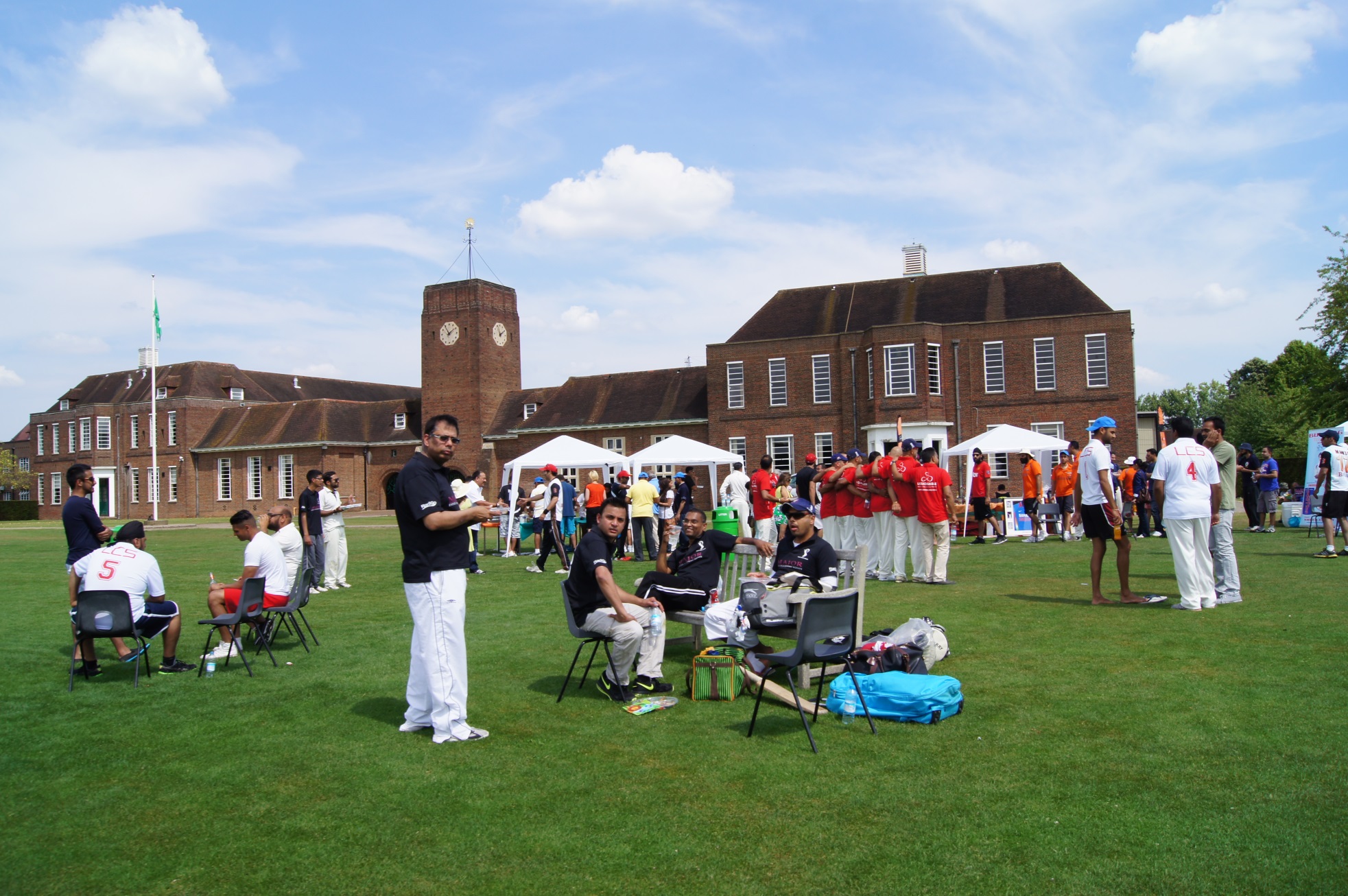 Laughing from the sidelines, the Prideview boys were keen to show their might after last year's disappointing show, blasting their way to 78 off 5 overs against Liquid and taking top place going into to the final match courtesy of a bonus point due to their 25-run win. In the final game, the much anticipated 'battle of the views', Prideview were put into bat and got off to a flyer taking 18 off the 1st over. But Bellevue did well to contain them to 60 after 5, and after Mitesh Vekaria plundered 21 off Jesal Patel's 4th over, an upset looked on the cards with 13 required to win. However, keen to settle the debate about how 'view' should be spelt, captain Nilesh Patel bowled line and length and 'Belleview' lost by 5 runs! 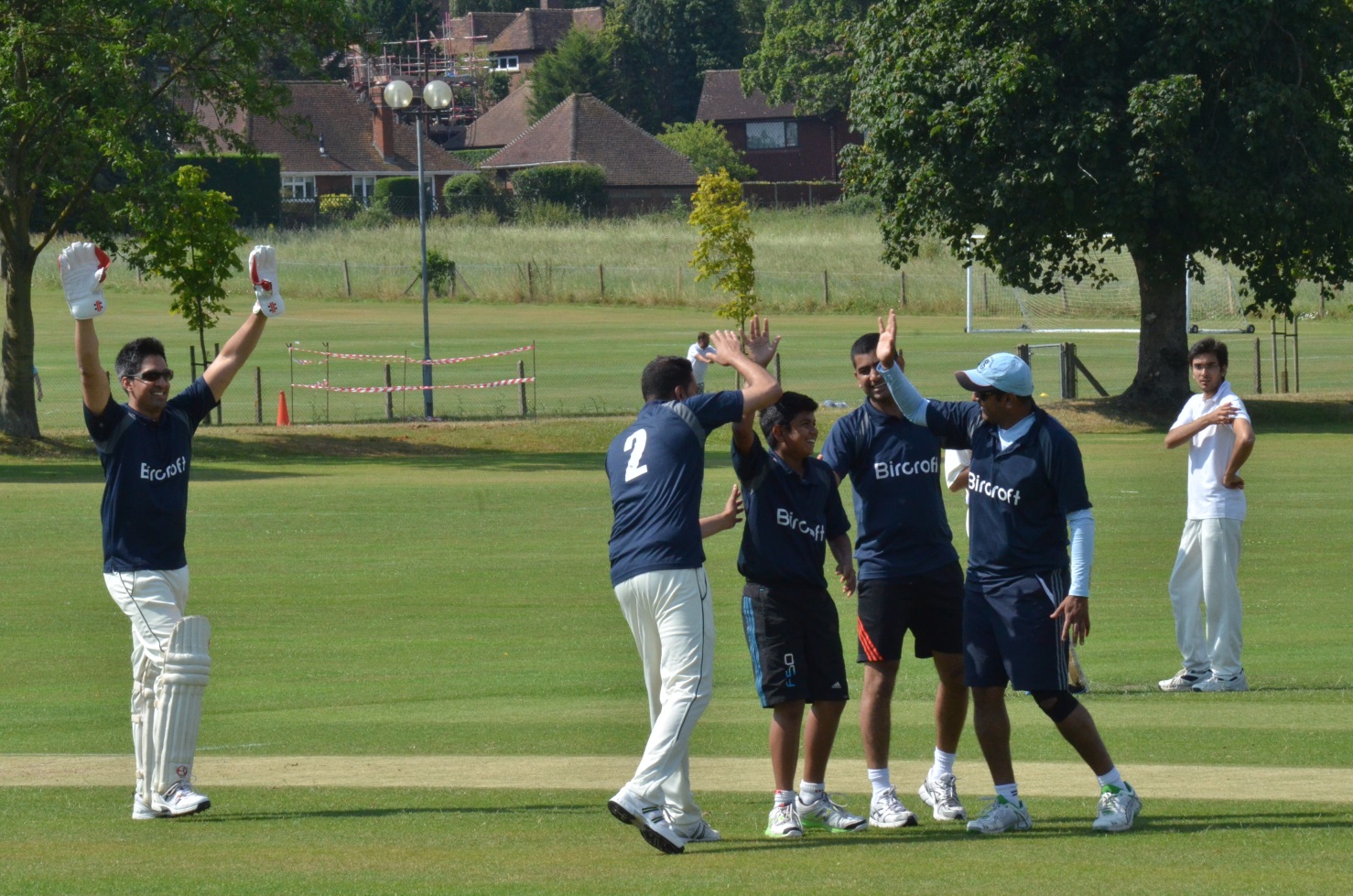 As diminutive 14-year old Kush Patel stepped up to bowl the 4th, the JCR batsmen thought Christmas had come early and hit a six of his first ball. However, the young sensation continued to loop the ball and thanks to some smart keeping by Amit Patel, the next ball out stumped. JCR continued to attack, and Kush continued to tempt them; by the end of the over he had taken 3 wickets (all stumped) for just 6 runs!  Chasing 57 to win, Bircroft still had a job to do. Anchoring one end, young Kush Patel put on a classy 25 not out, and whilst wickets fell at the other, it was left to captain cool Pritesh Patel to get 11 off the last over. Hitting a six that Mahendra Singh Dhoni would have been proud of, he won it for Bircroft, pulling off one of the biggest upsets of the day! JCR went on to thrash AWH winning with a bonus point, leaving the final game in Bircroft's hands to decide the group. After setting AWH a target of 63, opening batsmen Neil and Ian Jeffroy did well to get the team close before being forced to retire and in the end AWH fell just 5 runs short.

Group C was all about the Big Hug team, reigning champions and up against two unknown quantities in Metro Bank and Sandrove Brahams. The Big Hug boys looked set to defend their crown, and opening bat Anil Mansigani and opening bowler Aadil Datta both picked up from where they left off last year, helping to win both games by 25 and 37 runs respectively and earning an extra two bonus points in the process. Metro vs Sandrove became a fight for a berth in the Prideview Champions Trophy, and after Metro posted a total of 40, it was anyone's game. But some great Metro Bank bowling meant they just managed to pip 2nd spot, winning by a mere 3 runs.

With last year's PCT winner, Logicare and PCC semi-finalists, HT Drinks, this was always going to be a tough group. Logicare's stengthened outfit proved no match for HT, beating them by 16 runs, meaning HT's second game against unfancied new boys Major Estates was must-win. But what they did not know was that Major had brought along a Delhi Daredevils youth player for their opening game, making Group D officially the Group of Death! After HT posted what they thought might be a par score of 50-2, they did not think that 3.3 overs later they would be back in the dressing room having conceded the most expensive over of the tournament (28 runs) and lost by 5 wickets! Ouch. With Major's star players off to play elsewhere (!), Logicare tore apart their weakened side, hitting the highest total of the tournament (81-1) and wining by 47 runs. 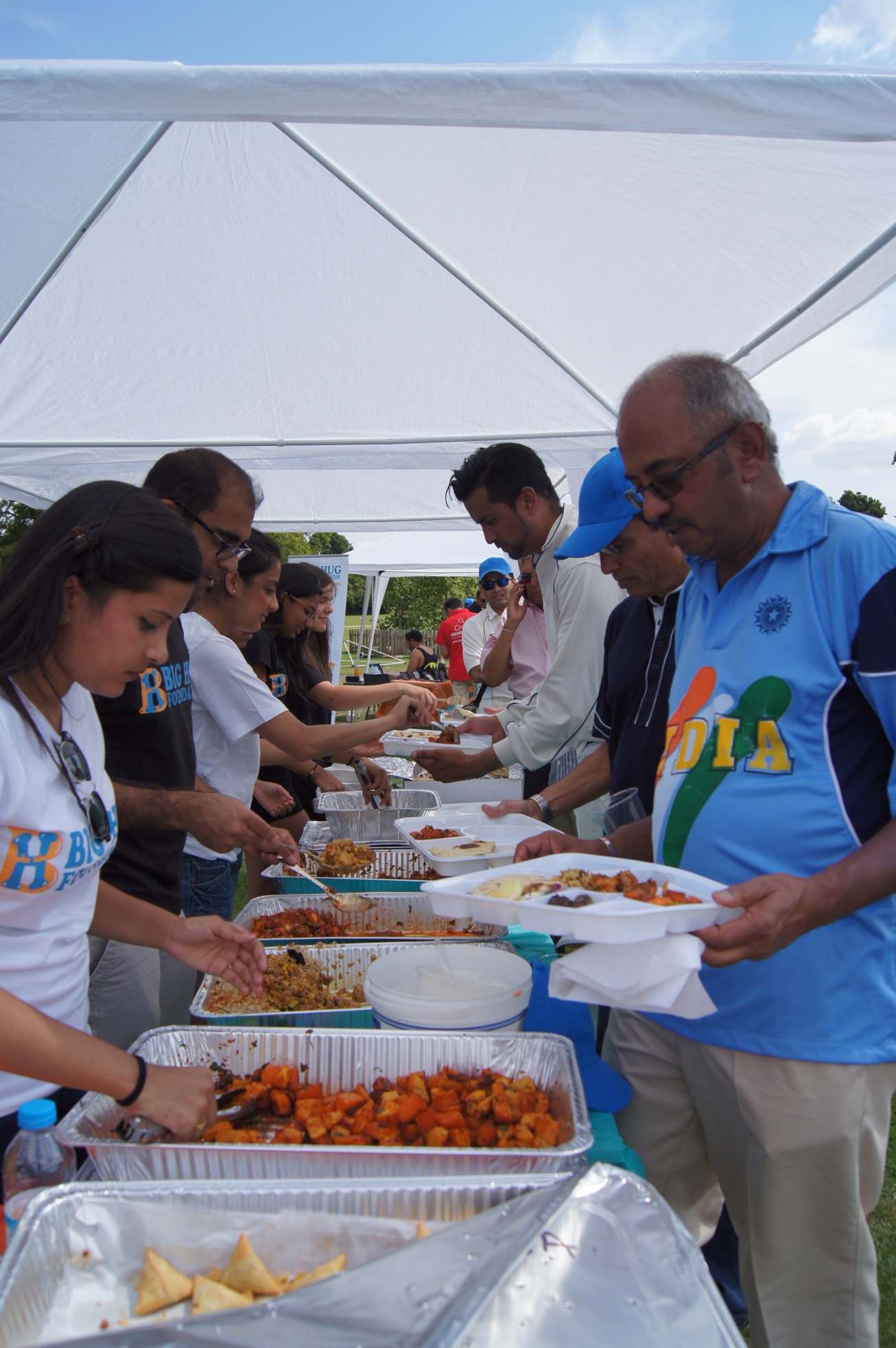 With the group stage over and temperatures soaring to around 30 degrees celsius, the losing teams clearly seemed happier than the winning teams with the prospect of less cricket and more bar time ahead! The first century of the day was scored by the HT Drinks bar, where 100 Masquerido beers were guzzled by 12pm and the next 100 downed by lunchtime! All players and staff enjoyed a spicy Indian lunch provided by Spice Rack Lounge in Stanmore - some more than others as it was noted that the Bircroft players could not resist tucking in ahead of their PCC Semi Final against the Prideview boys, who wisely stayed away!

JCR to play Major in the PCT Final

Before the deciding games commenced it was time for the raffle. Thanks to the generous donations of the players and spectators, and great selling by our volunteers, £1,600 of raffle tickets were sold - a fantastic amount! The top prize (a souvenir bat signed by Rahul Dravid, Shiv Chanderpaul, Adam Gilcrhist, Sean Pollock and Virender Sehwag) was won by Major Estates, but it was good to see fans and players from most teams winning something. Thanks to all the prize donors, especially Accessory Village who always donate plenty of fantastic prizes. 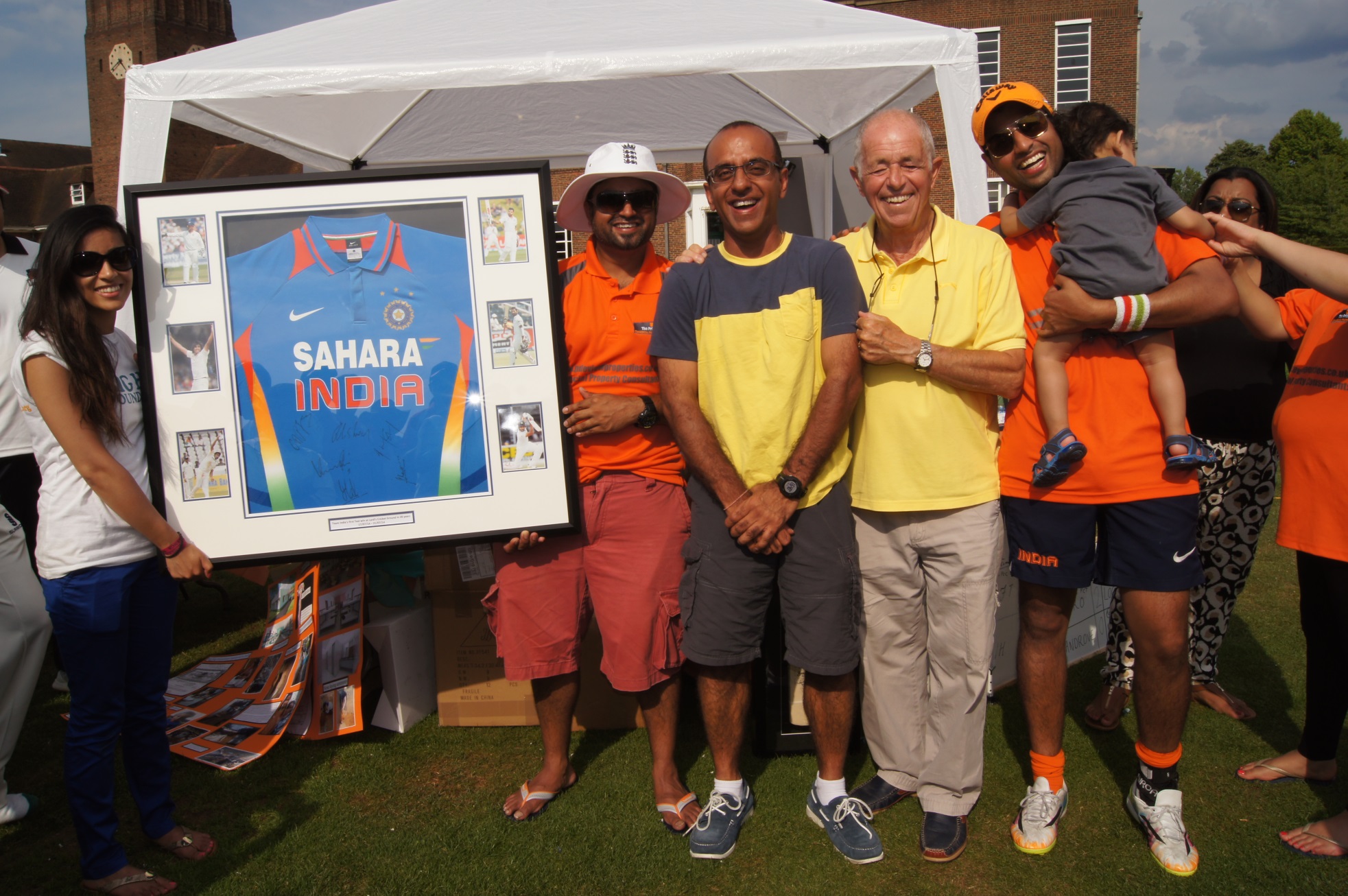 Perhaps the biggest success of the day was the charity auction. With John Barnett, head of Barnett Ross Auctioneers, running the auction, Prideview director Shailesh Patel could be forgiven for thinking he was buying a commercial property when he got a little carried away buying the signed Indian Test team bat (only the 5th one for our office!). Following some frantic bidding for the other two lots on offer, a framed ball signed by Sachin Tendulkar and a beautifully framed India shirt signed by the Indian Test team, the eventual buyers were the directors of Monarch Commercial and Capricorn Hotels respectively. In total the auction raised £3,500 - a great effort, and as the auctioneers say after each commercial property auction: "We are now accepting entries for our July 2015 auction!"

Best of the rest

Played amongst the teams that were last placed in their groups for bragging rights, the remaining (sober) players opted to join forces and play out an exciting 10-over match:

And so, after a long, hot day, it all boiled down to this. The two teams had history, having met each other in the PCT Final last year, which Logicare won. Logicare, after some fantastic performances, were favourites, but Prideview won an important toss and put them into bat. After scoring just 6 runs in a tight 1st over by 65 year old veteran Jagjit Sohal, which saw wicket keeper Vishal Patel expertly run out Bhavik Rana, Logicare's top batsman Sameer Patel went beserk in the 2nd and 3rd - suddenly it was 46 off 3 overs and the contest looked all but over. But the hosts refused to 'do a Brazil' and capitulate, and tighter bowling by Monish Patel helped pull things back - he took two wickets (thanks to great catches by Nilesh Patel and Harry Sohal) and effected a run-out in the final over. With 62-4 on the board, Logicare were in a good but not safe position. The hosts came out strong with Harry Sohal hitting consecutive fours in the 1st over, but after some tight bowling led to the unfortunate run-out of captain Nilesh Patel, too much was left on Sameer Amin's hands and in the end the Prideview boys fell 24 runs short. 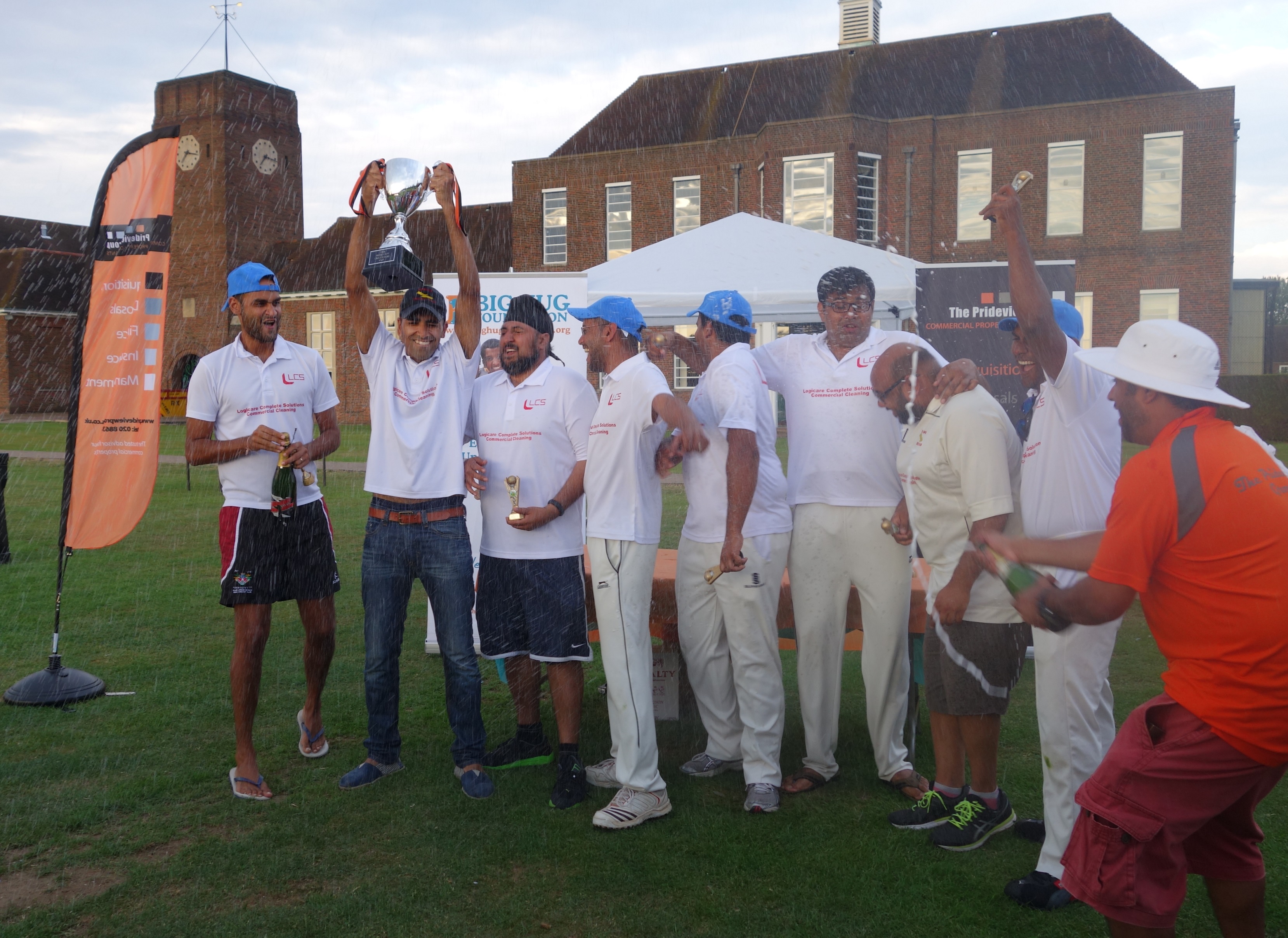 Below are details of the top 10 batsmen and top 10 bowlers in this year's tournament. Two Prideview Cricketers' Cup records were set this year: Sameer Patel of Logicare's 107 not out is the highest number of runs scored, and Monish Patel of Prideview's haul of 5 wickets for 34 off just 4 overs could remain unchallenged for some time to come.

Click here to see the tournament brochure once again, giving details of all the participants and sponsors. See you all next year, and remember if you would like to get involved in any way, please email nilesh@pridemanagement.co.uk 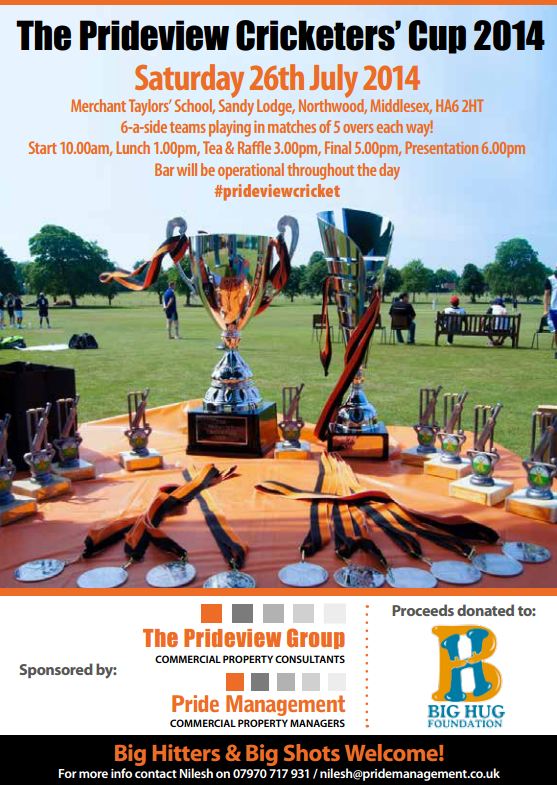