Convenience store property – is it time to ‘top up’ your portfolio?

Since the days some of us ran newsagents, the convenience store market has evolved massively. Multiples have swooped in on what used to be a local, family business, almost doubling their presence since 2003 in a trend set to continue given that total UK convenience store sales are forecast to reach £46.2Bn by 2018, compared to £35.6Bn as of last year. This article will summarise why this is so, who the main players are, what they are doing and how we, as commercial property investors, can take advantage.

Consumers today rely less and less on the ‘weekly shop’ preferring instead frequent ‘top-up’ shops – partly due to social factors such as the increasing number of single households, growth in the female working population and longer working hours, and partly due to the internet competing with supermarkets with respect to bulk and non-food items. Seeking to embrace the rise of the internet, the supermarkets have found a convenience store network is ideal for providing click-and-collect services and also for facilitating home delivery of perishable goods. Additionally higher fuel prices, increased focus on reducing food wastage, and the improved standards and product offering of today’s convenience stores are all driving their growing popularity. So what are the supermarkets doing about this and what does it mean for the private investor?

Co-op Food is the UK’s leading convenience retailer with over 2,000 stores. Being a ‘co-operative’ business, it’s run for its 8m customer members with a local focus. They plan to open 100 stores this year and in April announced a deal to lease 54 former Marstons pub sites on 15 years leases with no breaks. Despite the near collapse of Co-op Group’s banking division, the strength of its Food business enabled it to overcome the turmoil. We recently acquired a fantastic Co-op Food in Fulham (15 years no breaks) for 5.3% demonstrating the covenant strength, however higher yields are available for Co-op Foods run by one of the group’s independent co-operative societies such as the one in Eastbourne let to Southern Co-op on the same lease which went for 6.8%.

Tesco, though in second place with over 1,500 Tesco Express, 200 Tesco Metro and 600 One Stop stores, remains the most popular investment, given its net worth of ca. £3Bn. Amidst falling sales this year and competition from the discount grocers, Tesco’s strategy is to better use its convenience store network to consolidate its leadership position online - Tesco controls 45% of the UK online grocery market and already has 1,700 click-and-collect points for general merchandise and 200 for food. In late 2013 we sold one a Tesco Express in Elephant & Castle let on a 20 year lease with a 10 year break to an overseas investor for 5.07% and sold one in Greenwich with 8 years unexpired for 6.7% recently - cheaper because it may have been slightly over-rented. For those after a deal, One Stop, a wholly-owned subsidiary of Tesco, trades cheaper – we bought a One Stop in Braintree last summer on a 15 year lease with a 10 year break for 7.2%.

In 3rd place is Martin McColls, which operates over 700 McColls convenience stores and 500 Martins newsagents and plans to increase its convenience store portfolio to 1,000 by the end of 2016 both through acquisitions and conversions of existing newsagents. If you couldn’t buy shares in their recent IPO, we can still help you invest, but hopefully not at the price we just sold a newly refurbished McColls in Tunbridge Wells with a 20 year lease (no breaks) for – a staggering 4.6%!

Sainsbury’s Local is catching up fast; they opened 91 convenience stores in the year to March ’14, taking the tally to 600 and claim to account for 1/3 of the UK’s convenience store market growth.  Their standard lease is 15 years with a break at 10, and we negotiated two well-located deals this year in Surbiton and North Islington for 6.4% and 6.2% respectively, and expect to see more in the coming year. Meanwhile Morrisons has lagged way behind the rest in this format, but is aiming to double its portfolio to 200 M Local stores by the end of 2014. With additional shareholder pressure to sell and leaseback their freehold property, we’re already working on a few properties let to M Local for 15 years with a 10 year break, including the recently acquired South Croydon store, so stay tuned.

Many of our buyers are first-time investors, and arguably there is no better place to start than this sector. In all of the stated examples rent reviews are RPI-linked, meaning you and your bank can budget for a reasonable rental growth too. But remember, as good as tenant strength and lease length are, long term factors must not be ignored and often explain yield differentials - the location, the property itself and whether a ‘market’ rent is being paid. We look forward to helping you find the right investment so ‘check out’ our website and do get in touch to discuss more.

We regularly deal in off-market convenience store investments which won't be found on our website, and anyone wanting to receive these deals as they become available should register or update their profile here. 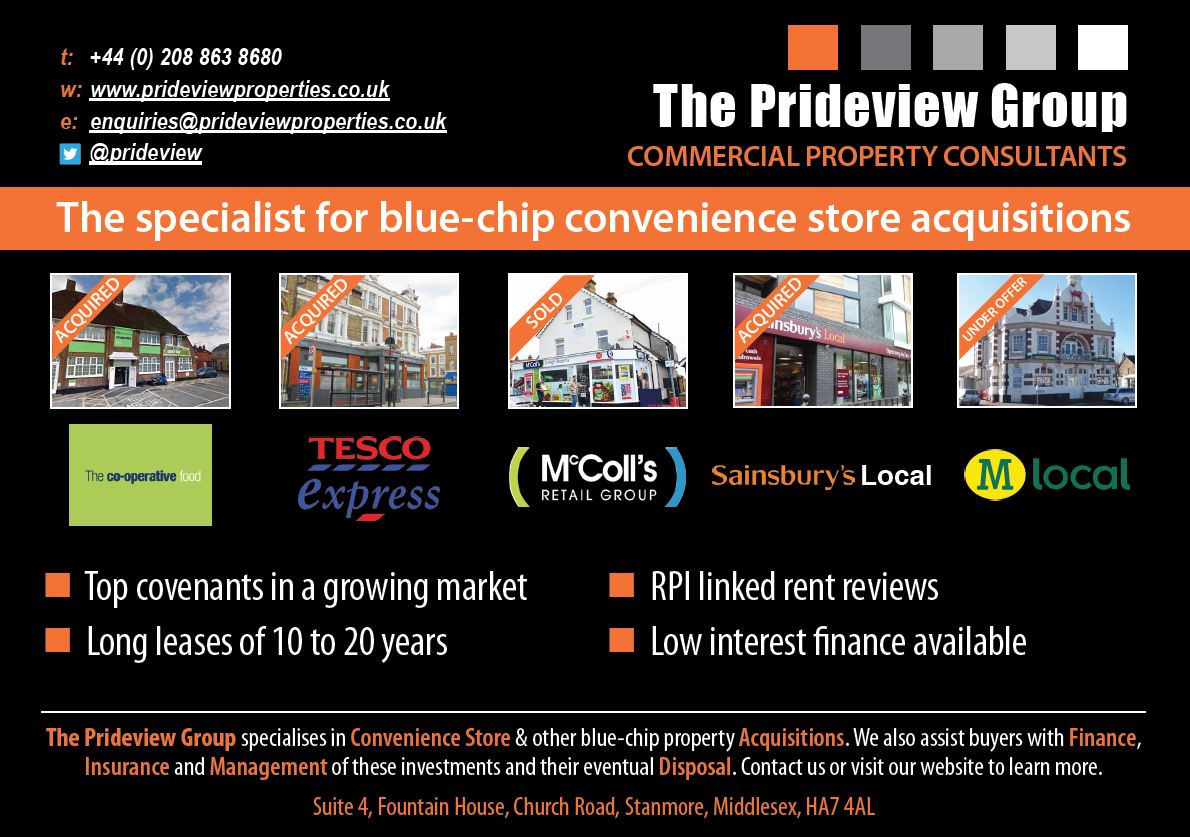