Giving orphans in India the power to dream

By Carol Davies. Published in The Gulf News Friday Magazine on 1st November 2013. Read the article and see all the pictures on the Friday magazine website here

The article below has provided welcome publicity for the great work of our chosen charity, Big Hug Foundation. We hope to build on this and continue raising more money, so please look out for our charity cricket, golf and football tournaments that we support each year and do get involved!

Moved by the poor living conditions in an Indian children’s home, Natasha Mansigani set up a charity to give the orphaned and neglected youngsters a better quality of life

When the alcoholic father of Muthailan and Muthuvel deserted the boys – then aged nine and 11 – and their mother in their small village in South India, the family fell apart. To feed her children, their mother turned to the flesh trade – and once neighbours discovered her shameful secret, they made her an outcast.

Cut off from all those she loved, and ridiculed daily, she was desperate. She poisoned both boys, and then hung herself. But villagers found the children in time to rush them to hospital, where doctors fought to save their lives.

Left homeless and orphaned, they had nowhere to turn, until the local child welfare office contacted a pastor, Jeyaseelan John, in Coimbatore, South India.

Muthailan and Muthuvel aren’t the only children Jeyaseelan has saved. Using his own money, he set up an orphanage – the Cornerstone Children’s Home – in an old warehouse to care for kids with no parents or whose parents are unable to look after them.

Traumatised by their experience, the boys did not speak or interact with volunteers around them for the first eight months. “At such a young age, they had suffered more than most will experience in a lifetime,” Jeyaseelan says. “But we were determined to help them put the horrors of their early childhood behind them, and make a life for themselves.”

The boys are not alone. India’s streets are home to more than 11 million children, according to a UN report, leaving many vulnerable to crime and entrapment in the sex trade. Faced with overwhelming need, the hot, cramped and unsanitary warehouse set up by Jeyaseelan quickly filled up with children who had nowhere else to turn.

Despite Jeyaseelan’s best efforts, the warehouse was simply not big or well-equipped enough to cope with the huge demand. And when Natasha Mansigani, now 25, volunteered at Cornerstone, she was moved almost to tears by the children’s stories. So three years ago she left her London charity job, determined to set up her own charity – what would become the Big Hug Foundation – to provide better accommodation for the children.

'They call each other brothers’ 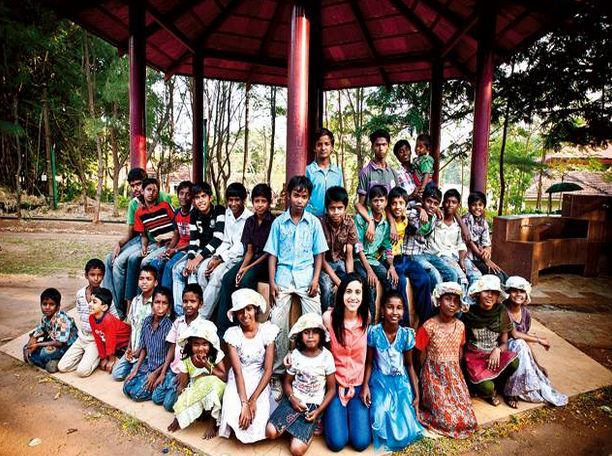 The youngest child in the orphanage, Gowri, now seven, moved to Cornerstone as he was unable to live with his drug addict, abusive father and depressed mother. Gowri’s brother Keerthivasan, 10, was also sent to Cornerstone, while his sister stayed at a girls’ home.

“Gowri has no recollection of the events that led him to Cornerstone Home, as he was only  a toddler when they occurred,” says Natasha.

“To him, the children at the home are his siblings, and the volunteers are his parents – they all call each other best friends, and brothers. He is an extremely bright boy who enjoys listening to music.”

Natasha searched for better premises, but landlords were wary about letting a family home to be used to house 30 children.

Then a friendly tuk-tuk driver found a kind landlord who was happy to rent a two-storey villa to be used as an orphanage – and careful refurbishment began. Natasha made several improvements over the old premises. Instead  of a tank to store water, which was delivered every 15 days and quickly became contaminated, she arranged for a bore well to be sunk.

“The children now have running water  24 hours a day to keep the home, and themselves, clean,” she says. “There are even low-level taps the little ones can reach.”

Unhygienic bathroom facilities were replaced with new ones, and the children no longer slept, worked and studied in a hot, poorly lit and ventilated warehouse but in airy bedrooms with more windows, lights and fans. Her aunt Divya Hari Khemchand, age 46, a mum of two herself who had had a comfortable upbringing in Dubai, was as keen as Natasha to do all she could to help.

When the children moved into their new home in March 2011, their eyes widened as they climbed the stairs and they let off party poppers to celebrate. “In the old home there were snakes  in the area, and we were very scared,” said 13-year-old Surya. “But thanks to Natasha  akka [sister], we have moved.”

“After going to our new home, we are very happy,” agreed Pooraja, 15. “Now we do not have any rashes on our arms because the home is clean.” And little Gowri said simply, “We are very happy, happy, jolly, jolly at the new home.”

Dreaming of an education

Natasha’s dreams go further – with charity trustee and co-founder Aadil Datta, she hopes to give these children an education too. “Together we have a passion for making the world a better place,” says Aadil. “And there is truly no better place to start than by helping future generations – these children are indeed the future.

“If we help with education and shelter, we give them an opportunity to make something of themselves. Giving opportunity not charity – this reflects what we do.”

After moving the children into their new home, Natasha was more determined than ever to raise funds to pay the Rs15,000 (Dh900) monthly rent, and winning the Vodafone World of Difference award – which allows people to take paid career breaks to work for charities – twice meant she could spend more time working with the tiny charity she founded.

Returning to London, she worked with volunteers, sponsors and donors to raise funds. With the support of trustees like her father Raj, who helped grow her fledgling charity, she returned in January 2012, and January this year.

Natasha has raised funds by organising sports tournaments, teaming up with Nilesh Raj Patel, who is a partner at The Prideview Group, which works with property investors in the UK, Dubai and India and has run cricket tournaments with the profit going to Big Hug.

“For me the trigger was the South Asian tsunami of December 2004, one of the worst disasters in modern history,” says Nilesh, who began organising sporting fundraisers then. “India is my country of origin, and after so many trips there it hurt to see the endless faces of poor children on the streets. So I chose India’s national sport, cricket, as a way to help.

“We wanted a small Indian charity to support, with a young dynamic founder, and when we came across Natasha from Big Hug Foundation we found out about the fantastic work she was doing for 30 children in South India. Small charities like this can make  a huge difference, and supporting education  is crucial to the development of any nation.”

Yet no matter how much is raised, the need will always be there. “We want to home, educate, love and protect many more, but we cannot do this without help,” Natasha says.

While volunteering at Cornerstone,  Natasha met seven-year-old Arun, who had  been abandoned by his grandfather on the outskirts of Coimbatore. “Unwanted by his mother and with fear written across his face, he was on the streets unprotected,” she recalls.

A bystander found Arun and tried to track down his mother, but was shocked to hear she couldn’t care for him and wanted him taken to the orphanage, where he now lives happily.

And children like Nandini, 14, whose mother spends all her resources looking after her sick husband and cannot care for her, need all the help Cornerstone can offer. While her mother was unable to afford the high cost of school fees and educational materials, Nandini is now receiving a good education in the happy home that is Cornerstone.

Determined to do more

When the lease on the current property expires next year, Natasha is determined to expand. Big Hug’s Big Build campaign aims to raise £60,000 to build a new orphanage in the countryside – so far £35,000 has been raised.

“We desperately need even more if we are to give these children the chance they deserve,” she says.

Even children who had such a tough start  in life are now thriving. Children who were once malnourished are now growing to a healthy weight with the nutritious porridge mix provided for them by Cornerstone.

Selvi, now 13, is another child who was saved by the orphanage. Her father died when she was very young, and when her mother contracted TB and could not look after her, Selvi’s future looked bleak. Yet at Cornerstone, she’s grown into a bright, imaginative child who is eager to learn English as well as her native Tamil. “My dream is to become a judge in Coimbatore,” she says.

Others too have great ambitions. Manoj Kumar lost his parents to HIV when he was just 14, though Manoj is fortunately clear of the disease. “I was depressed for nine months after my parents passed away,” he told Natasha through an interpreter. “I didn’t speak to any of the other children at the home.”

After years of giving her all to help 30 children in South India make a fresh start in life, Natasha is delighted with what she has achieved – and determined to do more. “I’ve seen the children grow healthier, happier and more confident, which is simply wonderful,” she says. “This is my dream – I’m so proud to be helping to create a life for these children who once had so little.”

And after a terrible start in life, Muthuvel is determined to turn his life around. “In this stable environment, I have flourished in my studies and am aiming to continue in higher education,” he says. “At last I have a bright future to look forward to.”

Who: Natasha Mansigani
What: The Big Hug Foundation, a UKbased charity (www.bighugfoundation.org)
How: Helping to raise funds for a children’s home in India