Throughout this series, we have been looking at some remarkable and iconic examples of commercial property in London, previously looking at The Shard, The Gherkin and Lloyds of London.

As commercial property agents in London, we are experts on commercial property. This means that we deal with some pretty impressive commercial buildings every day. London has a lot to offer when it comes to property, which is why we believe it’s one of the best places to invest in property.

In this post, we have turned our attention to the commercial skyscraper that is Heron Tower.

The Heron Tower (now called 110 Bishopsgate) is a commercial building in London. It’s 230 metres tall, including its 28 metre mast - making it the tallest building in London’s financial districtand the third tallest in Greater London. That is pretty impressive!

The building was designed by architects Kohn Pedersen Fox Associates. In their original vision, they wanted the building to be just 183m in height, which would have been the same size as Tower 42. This was met by some disagreements, mainly from English Heritage, who were arguing that it was going to be too close to St Paul’s Cathedral. It didn’t matter though; the building was given permission to go ahead in July 2002.

Fast forward three years and construction of the building still hadn’t begun. There was then an application submitted to increase the height of the building to 202m – they were granted permission once again.

It was designed to feature a concierge-style entrance, which would include a 70,000 litre aquarium containing 1,200 fish. This aquarium is the largest in the UK, containing over 60 species of fish. It even has two full time fish attendants! 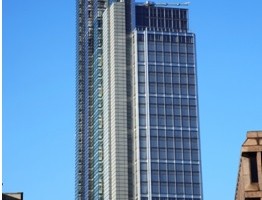 Construction of Heron Tower started in 2008 and wasn’t completed until 2011.

In April 2008, foundation piles and steel rebar cages were installed. The first tower crane was put up in June, followed by a second one in August, and a third in September. The speed of construction increased in January 2009, with the floors being constructed in sets of two.

By October 2009, the tower stood at 34 floors and was around 150m in height – officially classed as a skyscraper. By the end of 2009, it had become the tallest building in London!

What is in a name?

Although it is owned by Heron International, 2014 saw a 15-year deal to rename the tower take place. One of the tenants, SalesForce.com, occupies six floors of the building and around 18% of the office space. Therefore, they were granted the permission from Heron International to change the name to The Salesforce Tower. However, the City of London Council overruled and instead it was agreed to be renamed 110 Bishopsgate.

Whilst these buildings are some of the most popular and iconic in London, there is still plenty more waiting to be discovered. There are plenty of hidden property gems that aren’t famous – and many of them are available if you let us help you out!

Here at Prideview Properties, we aim to provide you with high quality service. We can aid you in all aspects of commercial property acquisition and management. We understand that property investment can be difficult and confusing, so we want to give you the best possible advice to make it work.

If you would like more information on any of our services, please do not hesitate to get in touch. You can ring us on 0208 863 8680 and a member of our team will be happy to help.