Over £9k raised in The Prideview Cricketers’ Cup ’13!

The 2nd edition of The Prideview Cricketers' Cup, contested on Sunday 14th July '13, was another a huge success! 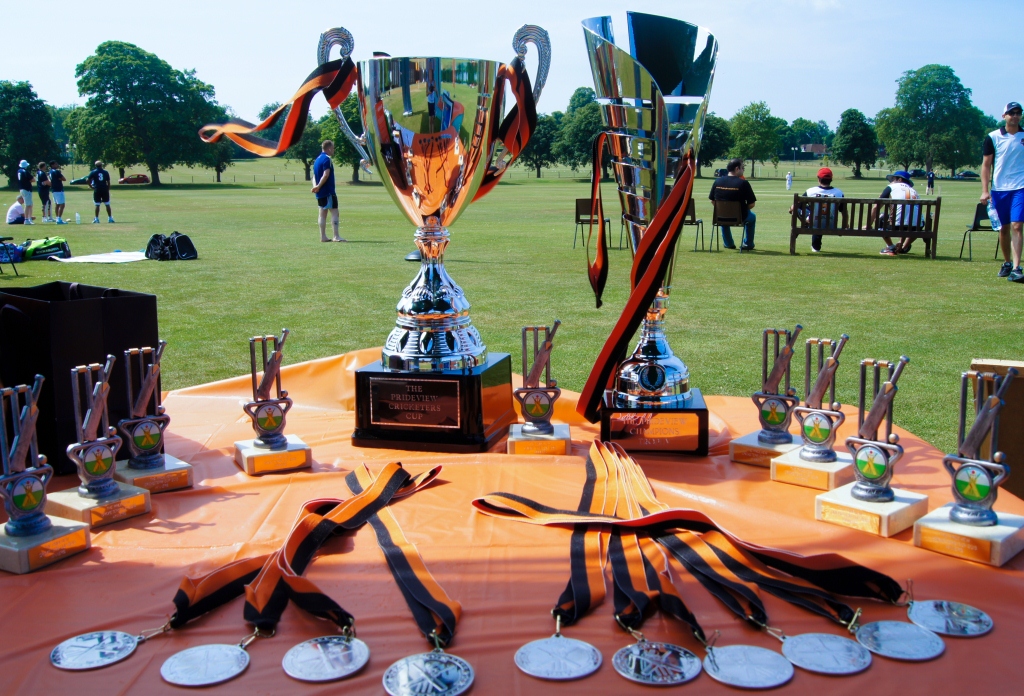 We are proud to announce that the event raised over £9,000 for Big Hug Foundation and The Peace Hospice in Watford. The combined contribution of our cricket tournaments has now raised 77% of the total needed for the construction of a 4,000 sq.ft. one floor orphanage for 30 street orphans in Coimbatore, South India - and with the India rupee currently at record lows our pounds will go even further - so thank you to all players and spectators who turned up in great spirits in the intense heat!

The outcome of this group was always going to be difficult to predict with 2 new entrants in the competition, Barnett Ross Auctioneers and HT Drinks. But given that many of the HT Drinks players represented Bircroft Insurance last year, it was actually Bircroft's group of fresh-faced city brokers who seemed most out of their depth. Barnett Ross made light work of Bircroft in the first game whilst HT Drinks' Sagar Thakrar seemed to have batted Prideview, last year's finalists, out of the game helping HT to 64 but a classy innings of 25* from Prideview's 12 year old sensation Samay Unadkat almost delivered them a memorable victory. 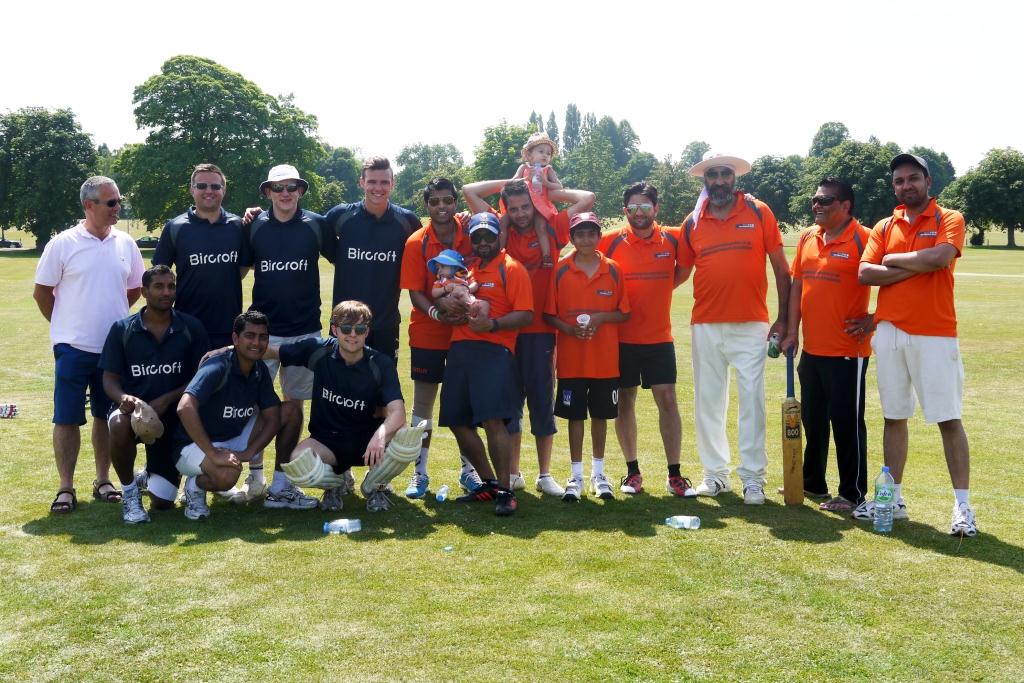 The next game saw the two losing teams, Prideview and Bircroft face off in a tournament eliminator, with the loser more or less guaranteed an early Spice Rack lunch. The rich aromas wafting over from the Spice Rack tent seemed to make the Bircroft boys weak at the knees, and the Prideview openers wasted no time in plundering boundary after boundary to register a clear victory. 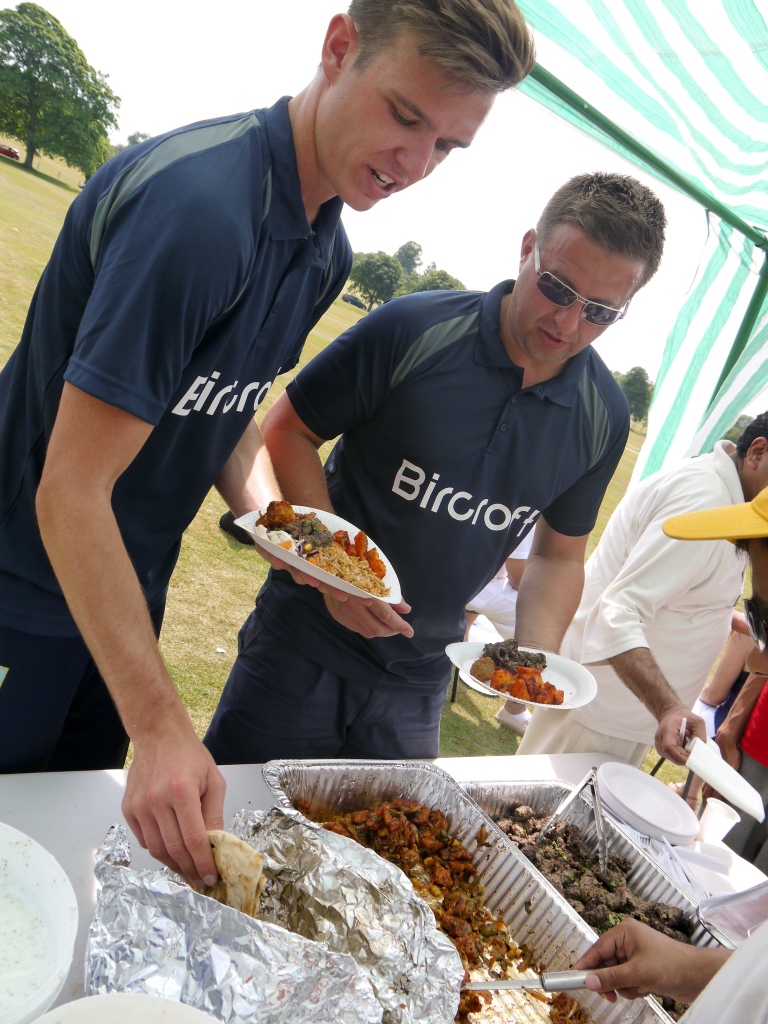 Prideview carried their momentum into the much-anticipated final game against Barnett Ross - the battle of the commercial property agents. Chasing 50 runs, Vishal Patel (somehow) carried his bat through the innings with Jesal Patel at the other end, and struck the winning runs with a sumptous blow through the covers that will be talked about in auction rooms for years to come!

Cruelly, a semi-final berth was not to be for Prideview, as they were the only team generous enough not to decimate their property insurance partners, whilst Barnett Ross qualified above HT Drinks owing to their superior head to head record. 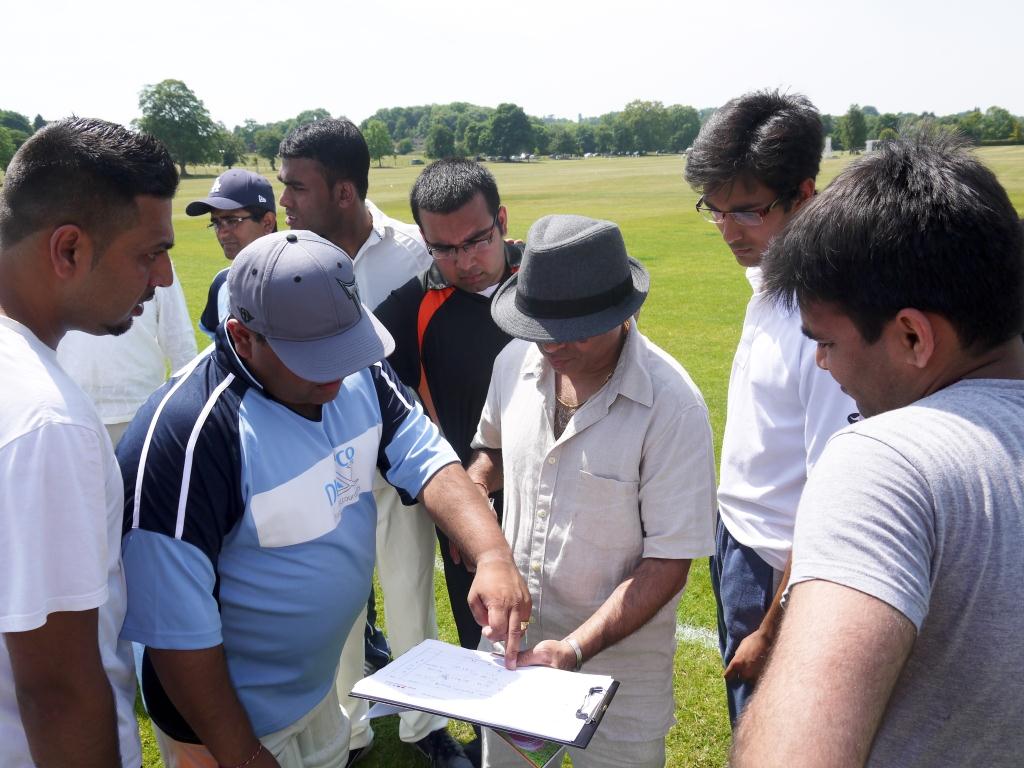 In the 2nd round the controversy continued in the clash of the accountants, JCR vs Dua. A good bowling performance by Dua kept JCR under 50, however it was in the innings break when tempers frayed as all 12 accountants could not agree on the innings total...some things never change! Eventually the number 49 was plucked out of the air, but regular wickets from Murali (tharan) Ramadoss and his team meant Dua could only muster up 27-4 in reply.

With Indus pounding Logicare, the group was decided after 2 games so the final matches, between Dua and Logicare, and JCR and Indus, became battles for 3rd and 1st place respectively. Unfortunately for Dua they were beaten comprehensively and therefore are yet to register a point in 2 years of the PCC. Meanwhile Indus trounced JCR with Anil Mansigani smashing his 3rd consecutive 25* and Indus recording a 3rd consecutive bonus point to finish up with 9 points! 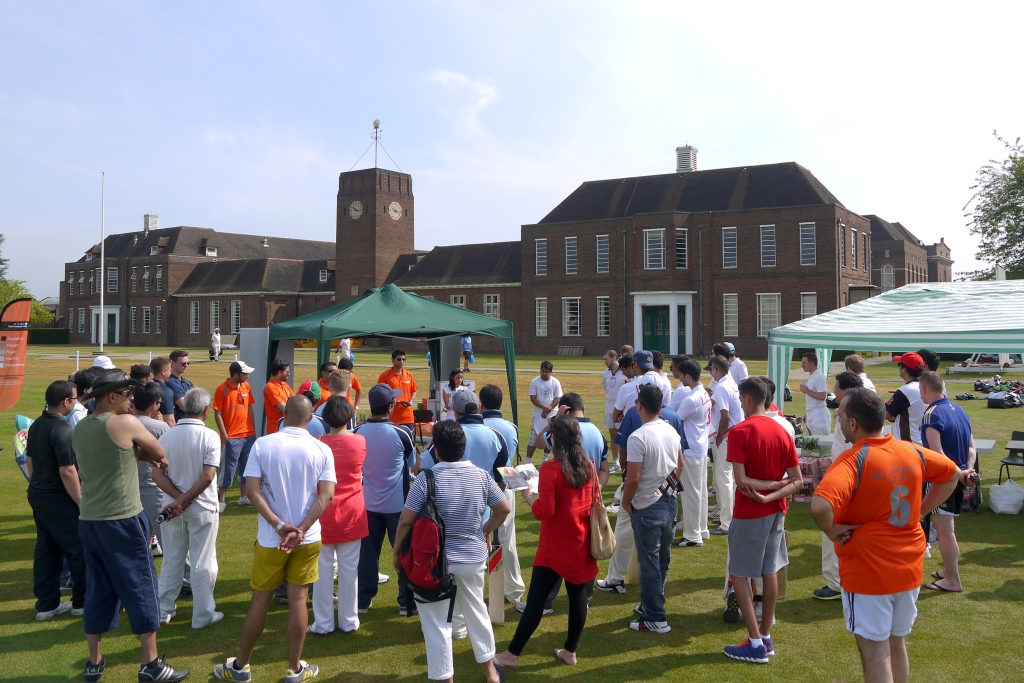 Fortunately for the likes of Dua and Bircroft there was some consolation with members of both teams winning a few of the fantastic set of prizes donated by Accessory Village, Hilton Eyewear, Spice Rack and Tazmere. But one of the highlights of the day will be Jesal Patel's auctioning off of Yuvraj Singh's signed Cricket World Cup '11 shirt, a tournament in which he ended up as the MVP. After some frantic bidding it was finally sold for £1,400 much to the delight of the crowd, and thanks must be given to Natasha Mansigani of Big Hug Foundation for offering this prize up for sale!

The playoff between the 3rd placed teams has been revamped this year and so for Logicare and Prideview failure to qualify was by no means the end of the road. From their 12-man squad Prideview sent in their big guns for this one, but history seemed to repeat itself as opener Nilesh Patel was run out once again in Prideview's second consecutive final, after a mix-up between his runner Jesal Patel and fellow opener Harry Sohal - clearly it had been one Masquerado beer too many for our Prideview stars! The eventual total of 49 never looked to be enough and opener James Graham put an end to any doubt with 25* within the 1st 2 overs. Some good bowling in the middle overs and an MS Dhoni-esque stumping by Nilesh Patel took the game to the final over but Logicare got over the line with 5 balls to spare. 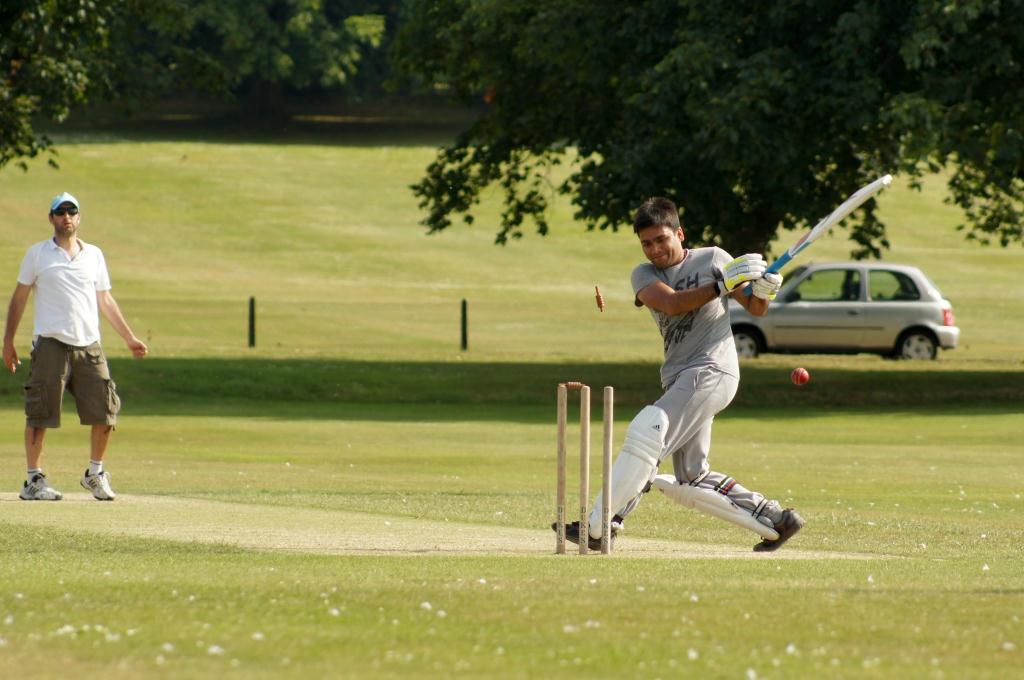 The 1st semi-final between the two Ross's was perhaps the game of the tournament. It was another solid innings by Priyesh Shah combined with a bit of erratic bowling that helped JCR to solid 64 in their bid to reach a 2nd consecutive final. But Barnett Ross were not to be outdone and even when their top batsman Olly Wills was run out for 10, Richard Haring and Adam Harvey stepped up to leave Barnett Ross requiring 12 off the last over. After hitting a 4 Richard had to retire thus exposing the tail who managed to get the equation down to 3 off the last ball, but an excellent final ball meant Barnett Ross ended up with 62 thus losing by just 2 runs.

If semi-final 1 was the game of the tournament, Bircroft and Dua will both be relieved to note that this was the thrashing off the tournament. With HT Drinks batting first, opening bowler Aadil Datta bowled the over of his life taking out both dangermen Sagar and Sanjay Thakrar and then effecting a run out whilst only conceding 4 runs. HT Drinks were stunned and crumbled to a meagre 7 all out. Indus gave their tail enders a chance to to finish off the routine chase which they did in the 1st over. 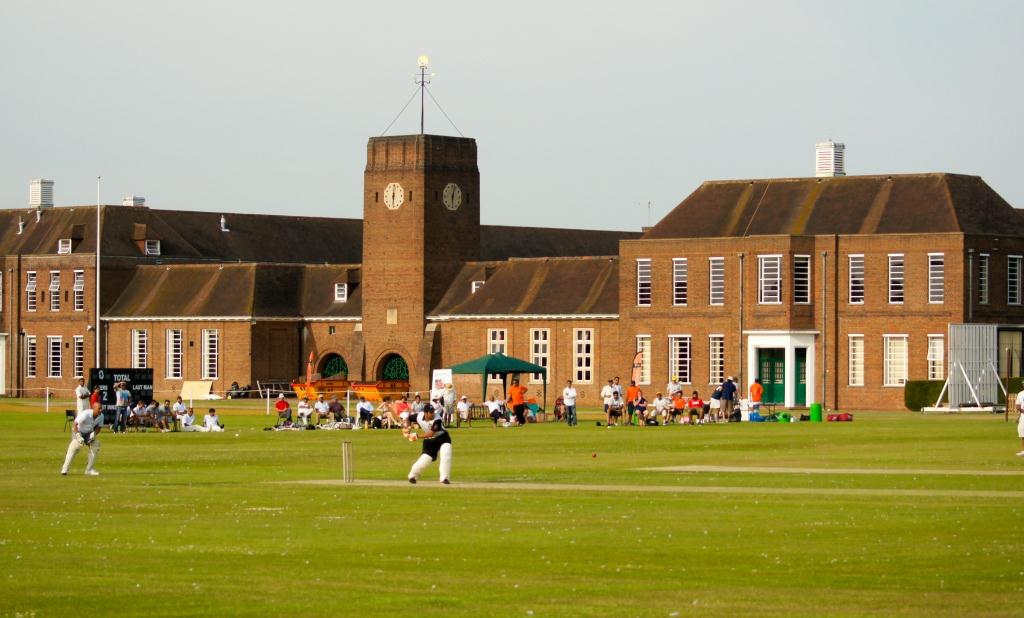 Last year the Big Hug boys lost to JCR in the semi-final and it seemed the memories of that defeat were still fresh in Anil Mansigani's mind when he bludgeoned 25 of the 1st 8 balls of the innings, retired, and took his seat before half of the spectators had even taken theirs! Meanwhile his opening partner, captain Raj Naini knocked a slightly cooler 25* pushing Indus to a towering 72-0 off their 5 overs. The JCR openers fought hard and ran hard til the very end, and whilst 56-1 was a credible total it was well short of the target. 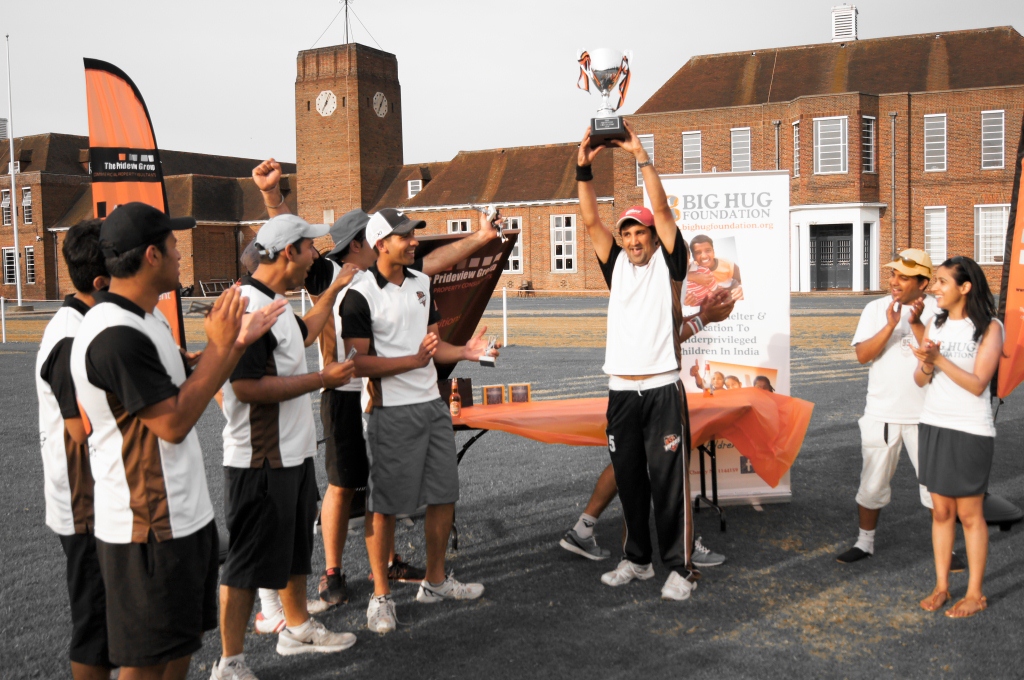 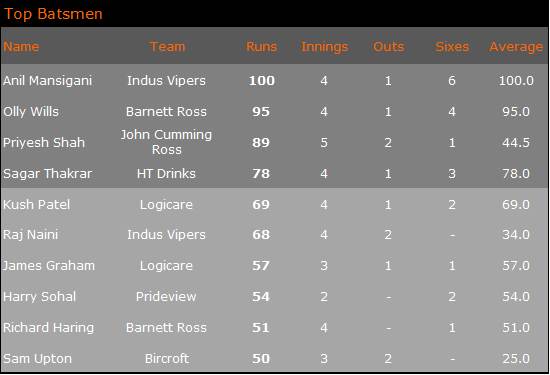 Below are details of the batsmen who scored over 50 runs and the bowlers who took 3 or more wickets, or who bowled at least 1 maiden over. Anil Mansigani of Indus Vipers became the 1st person to reach triple figures with 100 from 4 innings and also was the top 6 hitter with 6 blows, whilst Olly Wills of Barnett Ross ended up on an excellent 95. Lower down the leaderboard Prideview's Harry Sohal did well to get on to the honours board with just 2 innings, given Prideview's squad rotation policy!

Only 2 bowlers had 3 or more wickets this year, as opposed to 7 last year, suggesting batters were well on top in the hot conditions.

Adam Harvey of Barnett Ross topped the charts with 4-44 off 4, and the other 3 bowlers on the honours board all came from Indus Vipers, either due to having 3 wickets or having bowled a maiden over - their economy rates are very impressive and this Indus Vipers team will almost certainly have to play with a runs handicap in the next edition of the PCC!

Click here to see the tournament brochure, with details of the teams, sponsors and our chosen charities. See you next year! 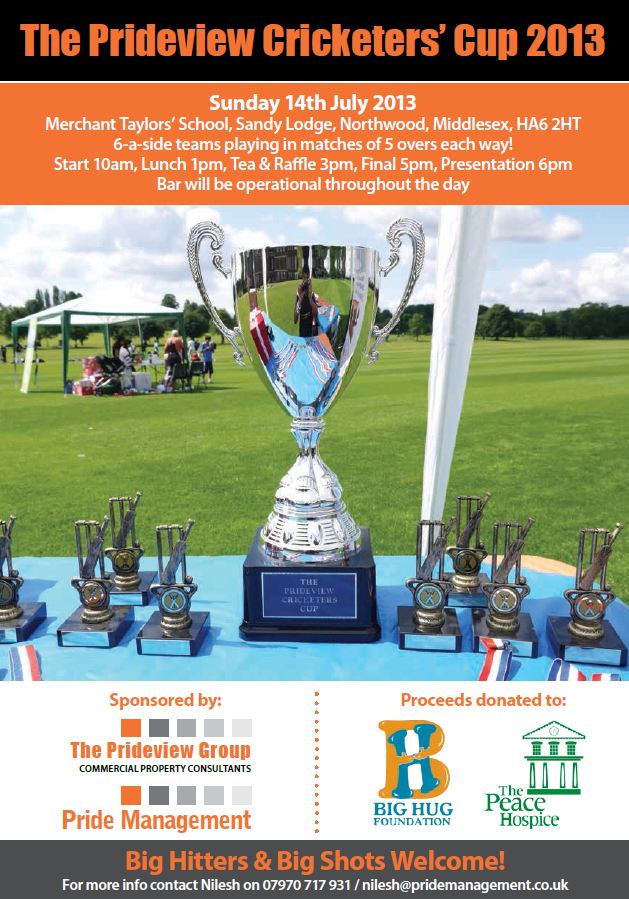